Coming from a 4-1 win over Paradou in the Caf Confederation Cup, the People’s Elephant got tamed before their home fans on a disappointing Wednesday.

Goals from Sadiq Abubakar and Chukwuemeka Obioma were all the Naze Millionaires needed to earn a vital away win.

Despite a late rally from the hosts, goalkeeper Ikechukwu Ezenwa denied his former team with several fine saves as Fidelis Ilechukwu’s side climbed to ninth in the NPFL with 21 points.

After being held to a 0-0 draw by Akwa United, the Peace Boys lost 2-1 to Kabiru Dogo’s Owena Whales in a tension-soaked encounter.

Thanks to an assist from Antony Omaka, Timileyin Ogunniyi put the hosts ahead in the 11th minute before Fuad Ekelojuoti doubled the lead 12 minutes from half-time.

The former NPFL kings fought hard in the second half but Uche Onwuasonya’s 57th-minute effort could not prevent them from crumbling away from home.

The standings after Match Week 15 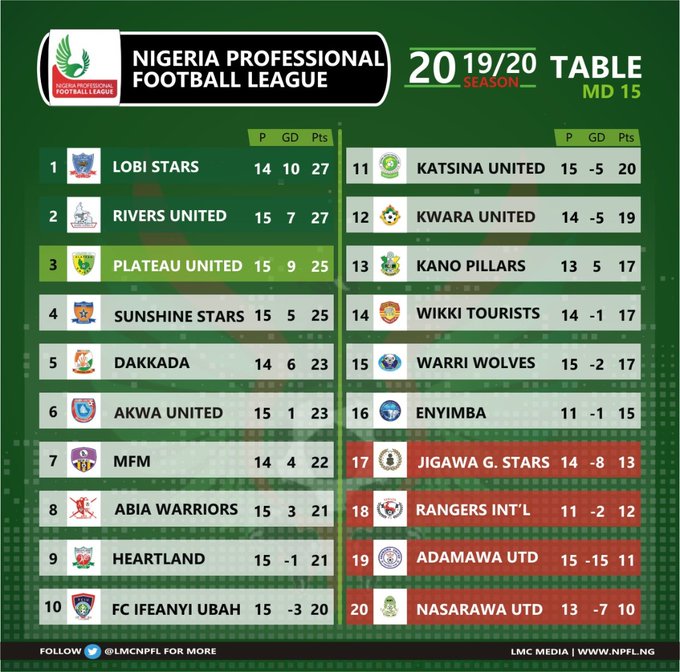 .
Adamawa United failed to make home advantage count after they were held to a 0-0 draw by Wikki Tourists.

Wikki, under the tutelage of newly appointed coach Usman Abdallah, put up a solid defensive display and were able to walk away with a point to stay 14th in the log with 17 points.

However, with 15 minutes away from full time, Malachi Ohawume scored the winning goal to send the Makurdi based outfit home with heads bowed low.

Since his appointment as head coach of Akwa United, Kennedy Boboye lost his first game as handler of the Promise Keepers.

His team put up a shambolic display to lose 2-0 at the Godswill Akpabio Stadium, with Alao Danbani scoring a brace to the delight of the visitors.

NPFL Wrap: Enyimba lose on the road as Plateau United return to summit after hitting 5 star against Adamawa United